After the stifling sterility and expensiveness of Switzerland’s cities, travelling to Hamburg came as an enormous relief. Upon arrival at the central station from my overnight train, I immediately knew I would enjoy my time in Germany’s second largest city. The station was bursting with activity in the morning rush hour, with buskers on the outdoor terraces and commuters queuing at the innumerable food outlets selling cheap but tantalising pretzels, rolls, sausages and cakes. Sure, the station entrance areas and the metro system were more dilapidated than the perfection of Swiss infrastructure, but that’s simply the consequences of humanity. I found the station immensely appealing because it evoked life and vitality, indicating that Hamburg did also. It was inevitable though that I would like Hamburg; I’ve travelled to Germany on 7 separate occasions (albeit once in transit – though I did enjoy a memorable first European meal at Frankfurt Airport!) and always felt a special connection with the country. I think its because of the respect I have for the German people and culture. They work hard and successfully, but they’re unpretentious and value time to socialise, travel and explore the great outdoors. They expect services to operate efficiently and products to be of high quality, but also demand affordability. Basically, they just want to live productive, happy lives and have no time for bullshit. Lets hope the country maintains this enviably mainstream ethos. 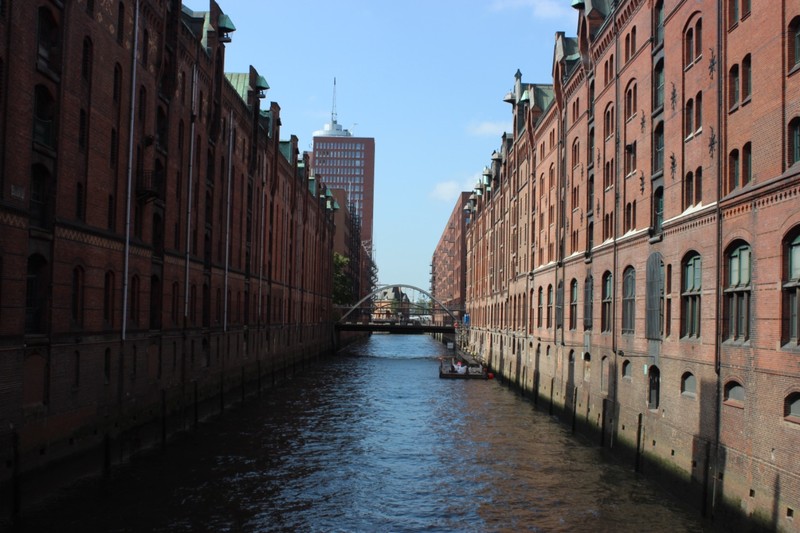 Often described as “Germany’s Gateway to the World”, Hamburg’s very existence and identity has forever been defined by its enormous port, still the second largest in Europe. The Port of Hamburg is actually located more than 100km from the North Sea, but its favourably positioned on the Elbe River where it branches into tributaries. The port’s establishment in the 12th century and the city’s designation as a “free imperial city” within the Holy Roman Empire enabled Hamburg to develop into one of the richest cities on the continent and one of the leading members of the medieval trading organisation, the Hanseatic League. Although technically within the Holy Roman Empire, Hamburg was essentially a independent city-state throughout most of its history and was ruled by a senate composed of its richest citizens. It maintained its status as a city-state within the German Empire, Weimar Republic, Nazi Germany and the contemporary Federal Republic of Germany, one of just 3 in the modern country. The pride Hamburgers have for their continuing independence is reflected in the official title, the Free Hanseatic City of Hamburg. 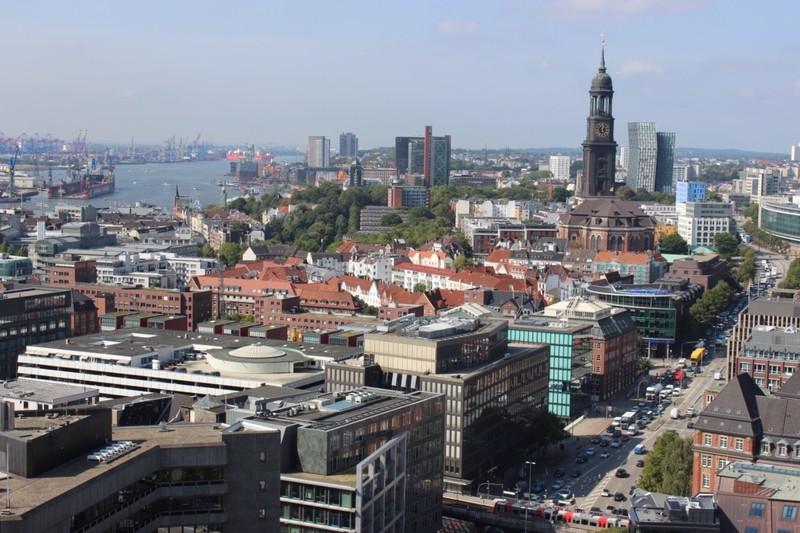 The maritime heritage of Hamburg is enshrined physically in the urban layout, with its innumerable waterways defining the contemporary city. The Alstadt (old town) is concentrated around the Alster River and its two associated lakes, with canals slicing through the area and forming interesting focal points. The old town isn’t particularly old, as most of Hamburg was destroyed by the RAAF during Operation Gomorrah in World War II. Operation Gomorrah was one of the most devastating sustained bombing attacks of the war, gutting the city’s capacity for industrial production, killing 40,000 people and creating an apocalyptic wasteland. Consequently, most of the buildings in the Aldstadt are imitations of historic architecture or modernist buildings. The 147m spire of St. Nicholas’ Church survived the bombing and is now a forlorn reminder of the city’s past, with the nave of the church obliterated. The neo-Gothic Rathaus, Hamburg’s city hall, was also a survivor of the war and is the Aldstadt’s most impressive structure with its oxidised copper roof. The Aldstadt is now mostly an atmospheric shopping and dining precinct with most of its streets pedestrianised. 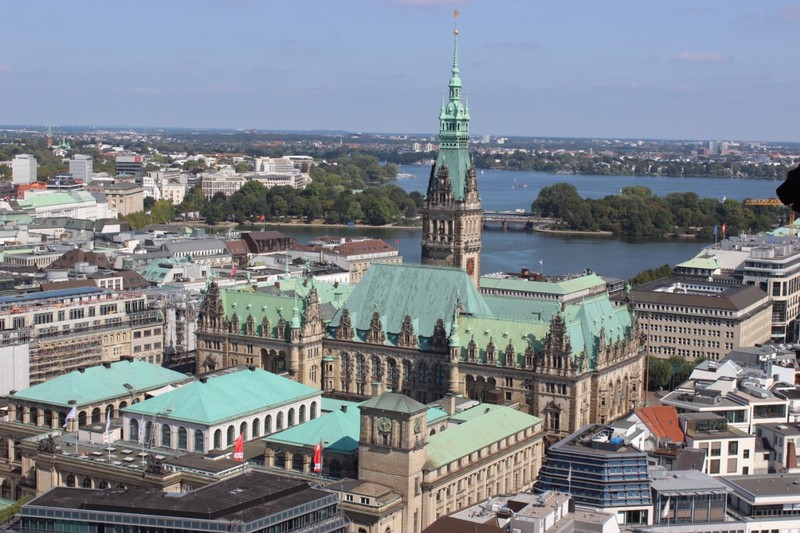 Unlike most metropolitan areas, the fundamental spirit of Hamburg derives not from its city centre, but rather its waterfront and port. Although Hamburg is a riverside city, the width of the Elbe is so vast and teeming with container ships that the urban interface with the river feels distinctly coastal. Hamburg uniquely embraces the aesthetics of its port and associated industry, with a bustling waterfront of restaurants, bars and public spaces that are intentionally positioned and designed to view the area. The port boasts the world’s largest contiguous warehouse district, the Speicherstadt, which was completed in the early twentieth century and is now a World Heritage site. The rows of neo-gothic red brick warehouses immediately front canals, creating the iconic scenery of Hamburg. Canals are ubiquitous in Hamburg, especially in the port area. Hamburg has more canals than Amsterdam and Venice combined and more bridges than any other city on earth. Hafen City is currently being developed adjacent the Speicherstadt and consists of post-modernist steel-and-glass structures overlooking the Elbe. The recently completed Elbphilharmonie is both geographically and architecturally a juncture point between the districts. The building consists of a glass structure mimicking waves or sails on top of a red brick warehouse. Controversially at a cost of over $1.2 billion, the Elbphilharmonie is one of the most acoustically advanced concert halls in the world, the tallest building in Hamburg (fantastic views from the free balcony) and is intended to become the key landmark of the city. 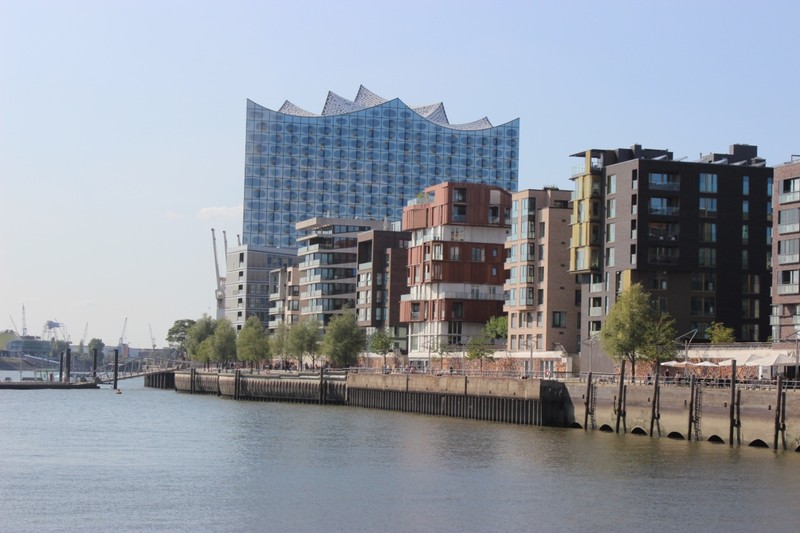 Immediately west of the city centre are Hamburg’s hipster neighbourhoods, an area very similar to the inner north of Melbourne. I stayed in a suburb called Schanviertel, which again was just like Fitzroy (although still busy late on weeknights), with thriving nightlife, backstreet pubs and boutique shops. St Pauli is famous throughout Europe as one of the best nightlife areas on the continent, especially in the Reperbaum. Unfortunately I didn’t have time to properly experience St Pauli, leaving me with a compelling reason to return to Hamburg.

German cuisine is essentially analogous with your favourite local pub. You’ll never experience the glorious heights of gastronomy, but you will reliably be served a substantial, wholesome, tasty and inexpensive meal. Germany was thus the perfect antidote to my constrained diet in Switzerland. I dined on German classics like schnitzel with creamy mushroom sauce and fried potatoes (big portion, delicious and just 6 euros!! I’m always amazed by how cheap food in Germany is), brotchën sandwiches (small German bread roll sandwiches, available at bakeries (the best in the world) everywhere) and pretzels. But what I love about Germany is that every city and region proudly boasts distinct culinary specialties. Naturally in Hamburg, the bounty of the sea differentiates the local food from elsewhere in the country. At a restaurant overlooking the harbour, I enjoyed finkenwerder scholle, the city’s sophisticated equivalent to fish and chips. Plaice, a depleting white fish from the North Sea, is panfried with bacon and served with creamy potato salad and pickled cucumber. I sampled perhaps Hamburg’s most iconic dish, labskaus, which is a slightly bizarre combination of mashed corned beef, potato and onions served hot with pickled herring, fried egg and gherkin pickles. Yes I agree, it sounds absolutely repulsive, but it was actually rather nice due to the saltiness. Nevertheless, I refreshed my palate with rote grütze, a Northern German and Danish dessert consisting of berries cooked in sugar and a starch to form a pudding and served with vanilla custard. Obviously, every meal I ate in Hamburg was accompanied by a lager or wheat beer – I had to make the most of my presence in Germany. 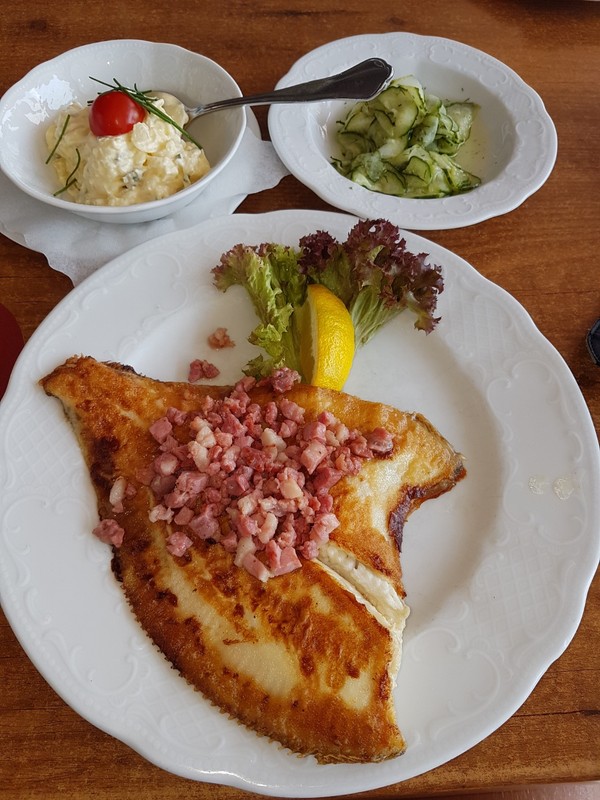 I wouldn’t describe Hamburg as a particularly beautiful city, at least not in the same league as Amsterdam, Paris, Barcelona or Prague. But Hamburg oozes character and culture and would clearly be a pleasant city to live in aside from the unreliable weather – so in many ways its like Melbourne! I’ve now visited all of the de facto cultural centres of Germany’s north, east, south and west: Hamburg, Berlin, Munich and Cologne respectively, which each boast very different identities. Hamburg is defined by its maritime heritage, which is particularly distinctive in a country with an inland focused culture like Germany. Berlin is characterised by its Soviet past and modern-day internationalism. Munich is evocative of quintessentially Bavarian traditions; while Cologne is a stylish city with numerous major events and is influenced by its proximity to France and the Low Countries. While Berlin is the definitely the most interesting from a purely touristic perspective, I’ve really enjoyed each city and its difficult for me to pinpoint which is my favourite overall.

That’s all for now,

Posted by Liamps 22:05 Archived in Germany

Previous Next Table of contents

Comments on this blog entry are now closed to non-Travellerspoint members. You can still leave a comment if you are a member of Travellerspoint.

If you aren't a member of Travellerspoint yet, you can join for free.